On 2 December, Mr Erwin Rohrlach celebrates his 100th birthday, surrounded by family in his home at Murray Bridge.

Growing up at Tablelands, between Eudunda and Truro, Mr Rohrlach has many childhood memories of the family farm with his eleven siblings.

‘We had a farm of 150 acres, and when you have horses as well, there’s always a lot to do each day,’ says Mr Rohrlach.

‘My siblings and I went to Freshwater Creek Primary School, which was actually a converted house that we shared with farmers doing seasonal work.’

‘We’d have to walk four kilometres daily to attend school; otherwise, we rode our horses.’

Mr Rohrlach left school at about 14 years of age. He explains: ‘I went to work on the farm long before that.’

‘Back in those days, it was all hard physical labour for us boys. We manually cut sheaves of hay and made stooks, and we had a horse and cart, as there were no tractors!

‘I also used to plough the farm with a five-furrow plough. With only being able to do about eight acres a day, you can imagine how long it would take to cover 150 acres!’

‘It wasn’t particularly hard work, but the job became monotonous after a while.’

‘As well as farming, my father tendered a contract to maintain and repair a chain [66 ft] of road, so all us boys would help with that, too.’

‘Rita lived east of Kapunda, and her family also had a farm — like everyone did in those days, if you lived rurally,’ he says.

‘We would often meet at socials, birthday parties and farewells. We had a lovely relationship.’

‘In 1949, Rita and I married at the Kapunda Lutheran Church. It was one of the best days of my life.’

Soon after, the newly married couple purchased a house and 85 acres at Koonunga, starting up their own family farm. 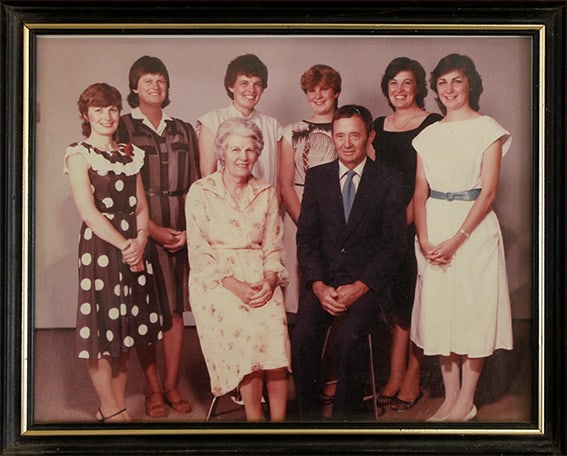 ‘There were no sheds or infrastructure on the property when we bought it, so we had to build it all ourselves. So, we got to work straight away — building sheds for hay, dairy, chooks and, of course, my cars!’

‘My parents gifted us a milking machine as a wedding present — it was all about practicality in those days!’

Over the next 15 years, the Rohrlachs expanded their family by having six children — all girls!

‘I held out hope that the next one might be a boy, all the while, I was getting more and more outnumbered!’

In the 1970s, the family moved to a farm at Murray Bridge, and the rest is history.

‘Rita and I loved living on that farm in Murray Bridge — it was truly a joy in our lives.’

‘When we retired, our eldest daughter and her husband purchased it from us. They continue farming the land today, with cattle, sheep, chooks, and cereal crops.’

‘I’m so very proud that the family business has continued.’

‘And if I had to pick the biggest change I’ve observed over my lifetime, it would have to be how much technology now plays a role in farming.’

‘Back in my day, everything was manual — it was hard work, but you could fix your own machine if you needed to. Nowadays, it’s all automated, and there are computers in tractors! Not to mention, the machinery is also so much bigger.’

‘In my younger years, I didn’t expect how much more sophisticated everything would become in the future,’ he says.

Mr and Mrs Rohrlach led a very active social life with family, friends and the church, and continued their hobbies. Particularly, Mr Rohrlach could always be found tinkering away in his shed.

The couple travelled extensively to Europe, America, and New Zealand, and also toured Australia. The novelty of travel never wore off, as Mr Rohrlach describes: ‘When we were kids, there was no such thing as holidays!’

They also remained steadfast in their faith: ‘We always attended our church services and spent time with friends from church. Faith has always been so important to us.’

Sadly, Rita passed away at age 93, but Mr Rohrlach fondly reflects on their life together: ‘We were married for 67 years. I put that down to loyalty.’

Now, Mr Rohrlach has 22 grandchildren and 19 great-grandchildren. He continues to live at home with the assistance of Resthaven and his family.

‘By far, my greatest achievement is starting with nothing and building a comfortable life, while raising a big family.’