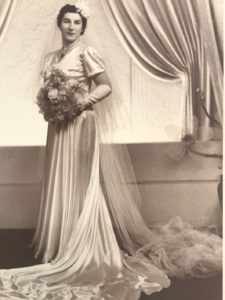 Born in Adelaide and raised in Angaston, Joan’s father worked at the National Bank, while her mother stayed at home to look after Joan and her two sisters.

‘I had a nice childhood with my family. I quite enjoyed school – my favourite subjects were English, Geography and History.’

Joan stayed in school for as long as she could.

‘I left school at the beginning of World War II, to do my service through nursing. Unfortunately my mother fell ill, and so I stayed home instead to look after her and the family.’

While disappointing at the time, Joan’s decision ended up being a blessing in disguise.

‘Soon after deciding to stay in Angaston, I met my husband to be, Walter, but we called him by his middle name, Morris. I would have been 17 then.’

‘He was a farmer and deemed an essential worker. He was one of the few men who didn’t go to war, although he desperately wanted to.’

After dating for a few years, Joan and Morris married on Joan’s 21st birthday.

‘It was a special milestone in my life, for many reasons.’

A couple of years later, the newlyweds welcomed two daughters and one son into their family.

‘We lived on the farm in McLaren Vale, where I’d first met Morris. It was a beautiful, big property. The children loved running around.’

‘I was very hands-on – I learned how to drive the tractor, milk a cow, churn the butter. You name it, I did it!’

Once the war was over, and the children were a bit older, Joan and Morris travelled around the world – a lifelong dream of theirs.

‘After retiring and selling the farm, we moved down to Christies Beach for a few years, which I enjoyed very much, but eventually settled back down in McLaren Vale.’

When asked about her secret to a long, happy life, she replied, ‘Think positive and enjoy life. Everybody has something going on in their lives, so you must always be kind.’

Joan now resides at Resthaven Leabrook, enjoying the lush gardens as much as she can.

She also enjoys weekly visits (when possible), and phone calls from her eight grandchildren and 22 great-grandchildren who ‘all look after me’.

Joan plans to celebrate her milestone birthday with a morning tea in the garden with the family.