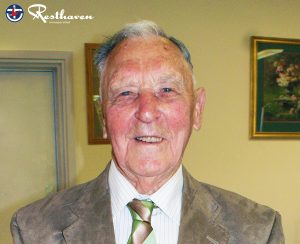 Volunteer, Les May, 96, continues to delight residents at Resthaven Mitcham with his ‘musical affairs’ radio program.

Lifestyle Coordinator, Sylvia Ortiz, says, ‘Musical Affairs’ began in 2011 with only a handful of residents once a fortnight.’

‘Now, it is a weekly occurrence, with around 30 participants.’

‘Les presents an hour long program of songs based on old favourites and requests, with popular and spiritual songs from the between the wars.’

‘Listening to the program is reminiscent of an old radio show, and the residents listen attentively, singing or humming along with the tunes.’

‘The playlist features favourite artists of the times, including Ella Fitzgerald and Dean Martin.’

‘Les still plays the songs on a cassette player with the old-style counter, so that he can queue up each piece.’

Les grew up in a somewhat musical family, and continued to carry a love of music throughout his whole life.

After serving in the Australian Army, at the end of World War II, he joined the Australian Comforts Fund, which drove around the camps, playing songs from the back of the truck to cheer up the wounded.

He was then offered a post-war internship with the BBC. He moved to London and worked in the BBC’s record library, where he had to wear a bow tie every day.

Sylvia says, ‘One of Les’ favourite songs reveals a lot about him: A long and winding road—full of great tunes and wonderful memories.’

Each year in May, Resthaven celebrates volunteers during National Volunteer Week with High Teas across all areas. This year, the High Tea theme is ‘Threads of Life—a yarn starts with “Hello”’.

Les joined other volunteers from Resthaven Mitcham, Malvern, Agedcare Alternatives and Westbourne Park at a thank you high tea on Tuesday 9 May.

Apply online to volunteer with Resthaven