Yesterday at Resthaven Malvern, stage 2 of the major redevelopment was officially ‘handed over’ to Manager, Terry Kirkwood, meaning that residents can now move into their new, large rooms.

The site, located at 43 Marlborough Street, is undergoing its first upgrade in more than 20 years, and this handover marks the ‘mid point’ of the $8.5m redevelopment, which commenced in December 2015. Complete building work is due for completion in late 2017.

The areas that have been finalised at Resthaven Malvern include 16 rooms in Kingfisher (including ‘suite’ rooms), the main kitchen, reception conveniences, hairdressing salon, nurses station, landscaped courtyards, temporary rooms to relocate residents during the building work, and new air conditioning units.

‘The primary aim of the redevelopment is to offer every resident a single room with an ensuite bathroom, accompanied by bright, modern, communal areas,’ says Resthaven Buildings and Capital Projects Manager, Emmet O’Donovan.

‘This redevelopment does not increase the number of people accommodated at the home, which will remain at around 75. It is about offering accommodation at the standard people have come to expect.’ 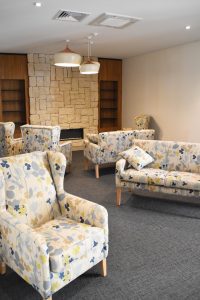 Manager, Terry Kirkwood, is delighted with the progress, saying, ‘Today marked a significant moment, as residents can now begin to enjoy their amazing new rooms.’

‘They are large, modern, and exquisitely finished, all with built in robes and brand new private ensuites.’

‘There are several communal lounge areas (pictured), where residents and their families can gather and socialise.’

‘We also have three premium “suites,” which have separate lounge and bedroom areas.’

‘Existing residents will be charged no extra to move into their upgraded rooms.’

Resthaven Malvern opened in 1954 as the second Resthaven aged care home. Today, it is the home of up to 75 older people, and just one of Resthaven’s eleven full accredited residential aged care homes located across metropolitan Adelaide, the Adelaide Hills, Murraylands, Fleurieu and Mount Gambier.