When 25-year Resthaven volunteer, Glenda McDonald, decided it was time to move into residential aged care, the obvious choice was Resthaven. After all, she says, ‘I feel part of the place.’

A trained nurse, Glenda started her volunteering career with Resthaven later in life, when her children were a little older and she wanted to ‘give something back.’

‘I’d trained at the Women’s [then the Queen Victoria Hospital], then went to Mount Gambier, then to The Queen Elizabeth Hospital, where I graduated with Honours,’ she says.

‘I was going to go to Edenhope and do country nursing. Then, in 12 months’ time, I was married to a farmer! And nurses weren’t allowed to work after we were married.’

However, Glenda continued to maintain an active lifestyle, competing in the City to Bay eight times and raising her two daughters. In 1984, she completed a ‘Keep fit for older people’ course, and was asked to come and work at Resthaven Mitcham as part of the lifestyle team.

Following the retirement of her husband, Lawrie, Glenda decided to come back in a volunteer capacity instead, giving her the freedom to ‘go off caravanning’ with Lawrie if she wished. Thus began Glenda’s career as a volunteer with Resthaven Mitcham. As she says, ‘Resthaven really picked me.’ 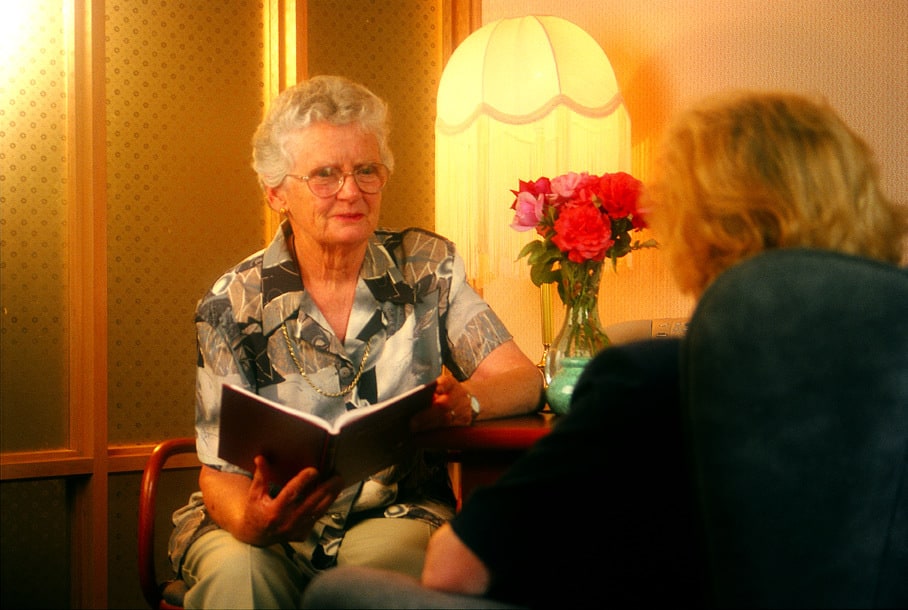 ‘I’d been doing the exercises for a while, and I thought I’d enquire about doing a morning tea,’ she says.

‘A friend and I started it on the condition that we could use table cloths and fine china.’

So it was that, for 15 years, Glenda baked scones on Tuesday mornings, then took them to Resthaven Mitcham to serve to residents. When Food Safety regulations changed in the 1990s, Glenda baked them on site in an activity room kitchen following all the food safe requirements.

The Devonshire Tea Tuesday Group tradition continues at the home to this day, complete with lace table cloths and fine china.

Glenda says that volunteering with Resthaven always gave her a ‘special feeling; I didn’t do it for myself, I did it for other people.’

‘I think volunteering brings a sort of serenity to life – and gave value to our lives. It gave me a purpose to volunteer and serve others.’

‘However, you can’t volunteer in a place like Resthaven without recognising what it is to be older.’

‘I’ve always been active physically, I still go out. I am very independent still; but I always said that I’d know when I needed help. One day, I realised that I wasn’t doing as much as I wanted to, so I better think about moving into residential care.’

Glenda moved into Resthaven Bellevue Heights in early 2020, continuing her longstanding and valued contribution as a member of the Resthaven community. Thank you for your service, Glenda.

Celebrating 85 years in 2020, Resthaven Incorporated is a not for profit, South Australian aged care community service associated with the Uniting Church. Resthaven’s residential and in-home care and support options are offered throughout metropolitan Adelaide, the Adelaide Hills, Murraylands, Riverland, Barossa, Fleurieu Peninsula and the Limestone Coast.