As Mrs Marjorie “Marj” Holman celebrates her 100th birthday on 1 October, she reflects on her life full of faith, volunteering and travelling, sharing her secret to reaching her centenarian milestone.

The second child of Roy and Lucy, Marj was born and raised on the family farm in a small mid-north town, along with her two brothers and two sisters.

Marj looks back on her parents fondly, as clear role models in life, ‘My father was a farmer, taught us many life skills that made me tough. My mother was a school teacher – I followed in her footsteps.’

‘I would have been 19 when I started teaching in a school called Little Italy, in the Flinders Ranges. It was far away from my family, who stayed back home on the farm.’

Marj was thrown in the deep end, teaching thirty children in seven different grades – without training.

‘Back then, being a country town, you started teaching before you got the training. I remember the pain of leaving my family behind – my resilience grew ten-fold.’

As a young adult living alone for the first time, during the Great Depression, Marj didn’t forget her roots.

‘I was used to saving. I walked to work every day, rather than catching the tram, and I owned three dresses in total.’

As Marj reached her 21st birthday, fate brought her to the small-town dance, where her life would change forever.

‘I met Ronald, who was on leave from his job in the air force at the time. We hit it off straight away, but I remember saying to my Mum, “I’ll make the most of it, but it won’t last forever”, well, I guess I was wrong!’

‘He never properly proposed, he just wasn’t like that. I remember us travelling 70km in the back of a chap’s ute on one of our many adventures. I asked Ronald if he would take care of me then, and I will never forget his reply – “I’m going to look after you for the rest of my life”, and I replied, “too right!”.’

Marj and Ronald relocated to Kyancutta, a small wheatbelt town at the junction of the Eyre and Tod Highways on the Eyre Peninsula, 553.4 km from Adelaide. Here, they stayed for twenty years, farming and store-keeping, amongst other things.

‘We kept ourselves busy, and we were the adventurous type, travelling all around Australia in any way we could – caravans, cars, off-road – you name it, we’ve done it!’

Marj and Ronald had five children, but unfortunately lost one of their girls in infancy – they never forgot her.

During Marj’s life, she remembers always keeping ‘happy and active’, and having many craft projects on the go, most of them going towards the community through the Uniting Church.

‘I have always been with the Uniting Church, and at one point I was a lay preacher – an assistant of sorts.’

Through the Uniting Church, Marj found Resthaven, and volunteered with Resthaven Westbourne Park for more than twenty-five years, working in the site shop.

‘I still keep my engraved pen on me, I have it with me right now!’ 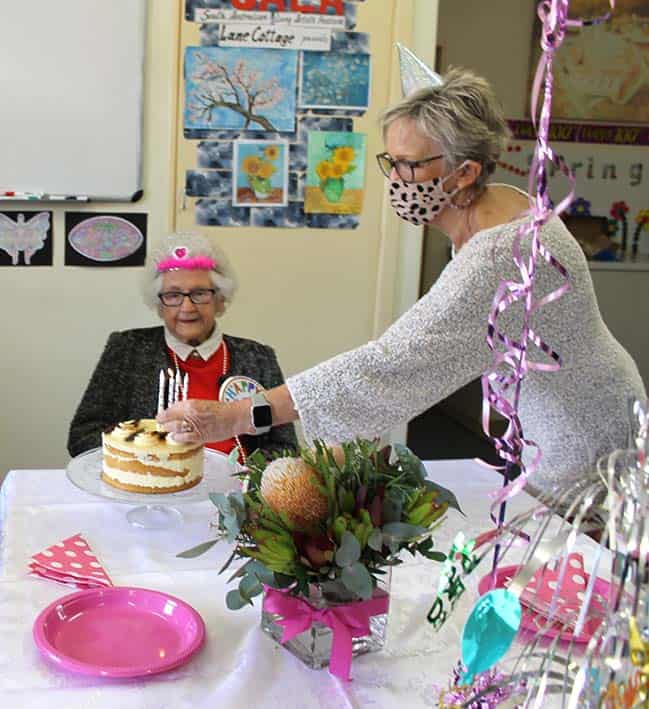 Marj continues to be supported to live independently through Resthaven Community Services, and every Sunday, you will find her on Westbourne Park’s Uniting Church livestream, receiving church services through her new gadget.

‘I used to be an avid reader, but now I play on my iPad!’

Marj shares, ‘The secret to a long life is faith. Faith has gotten me through everything in my life, and has helped me to be strong, happy and active – no matter what storms I weathered.’

Established in 1935, Resthaven is a South Australian not-for-profit aged care community service associated with the Uniting Church in Australia.

Every day, Resthaven shares the lives and wisdom of older people and their carers, opening doors to the full range of aged care service options available.