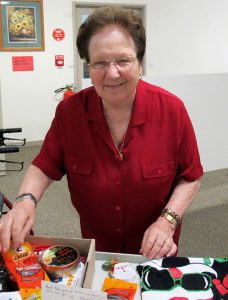 Resthaven Paradise residents have been reflecting on things to be thankful for.

This came about whilst attending a recent church service by the site Coordinating Chaplain, Rev Cate Baker.

‘Residents are passionate about giving back where they can. They believe, just because someone receives a service, that doesn’t mean they can’t also provide a service—such as make a donation or undertake a task—a service to others’, says Belle Kerr, Manager, Resthaven Paradise.

‘As the service occurred not long after Remembrance Day, the idea was hatched to support Australia’s Defence Forces deployed overseas at Christmas. The residents loved the idea.’

‘They made up and sent two care parcels for soldiers serving in the Middle East.’

‘The Department of Defence supports the public to send care parcels to personnel, made possible with sponsorship from Australia Post.

In addition, the residents enclosed some personal photos in the box, and many residents signed the Christmas cards that were sent with them.

‘We included a stamped self-addressed envelope, so that residents can receive a message back from the recipient.’

For anyone wanting to donate their own care parcels, they can be dropped off at an Australia Post outlet by 7 December 2017.