The films were the culmination of a collaborative project between Resthaven and the City of Unley which aims to explore, record and share the perspective of older people about getting older and remaining positive, active and valued members of their family and community.

Resthaven and the City of Unley worked in partnership throughout the co-funded ‘Unley Legends’ project.

The series of short videos showcases seven inspiring legends of the Unley community who are still young at heart. 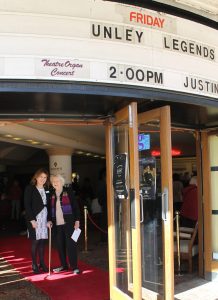 Resthaven CEO, Richard Hearn, says, ‘We have been working hard to challenge ageist stereotypes and encourage positive images of older people who are active and valuable members of our communities.’

‘We are particularly proud that two of our Resthaven Malvern “family”, Elwyn Penna and Noreen Bray, feature as Unley Legends.’

‘They represent the good work of others – and there are many of them.’

‘It is important that we encourage community spirit and community connectedness, neighbours speaking with neighbours, supporting each other, and pride in our local community.’

Unley Mayor Lachlan Clyne said, ‘Together with Resthaven, we’re on a mission to challenge people’s stereotypes about what it means to age.’

‘We need to remind people that age is just a number and it doesn’t have to restrict you from being active and doing the things that you love.’

‘We hope the joint project will encourage the community to recognise older people’s worth as individuals.’